The bistable power relays of the 30 series retain their last position ‘based on remanent magnetism’. Remanent (or residual) magnetism is a phenomenon that only occurs in ferromagnetic materials, such as those used in the core of 30 series relays.

What is ferromagnetic material?

A ferromagnetic material can be made magnetic by applying an external magnetic field to the material. In some cases this happens unintentionally, and the magnetization is undesirable. It is even commonplace for ferromagnetic materials to themselves become magnetic, under the influence of magnetic sources such as lifting magnets, clamping tables, loudspeakers or conveyor systems. The magnetism can also be induced by magnetic fields around transformers and welding cables, or due to machining operations such as drilling, grinding, sanding and sawing.

However, in certain cases, the ability of ferromagnetic material to become (and stay) magnetic is highly useful, as in the relays of the 30 series. 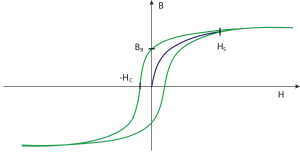 The residual or remanent magnetism effect is graphically illustrated in the figure above. Here, the external magnetic field strength (H) is plotted on the x-axis and the degree of magnetization (B) on the y-axis. The blue line shows how a pure ‘virgin’ material is magnetized by applying an external magnetic field. It is clear that at a certain point (HS), saturation occurs; in other words, increasing the field strength will not increase the magnetism.

As the field strength is reduced, the magnetism will again decrease (upper green line), with a corresponding hysteresis effect. The magnetism therefore decreases to a lesser extent than it increased. This leads to the situation that at a field strength of zero (0), some magnetism remains in the material; this we refer to as the remanent magnetism (BR). Only when the magnetic field polarity is reversed, will the magnetism ultimately drop to zero (at -HC), and subsequently build up once more, but with opposite polarity.

From this point, when the external field is again built up with the original polarity, the field strength will have to rise significantly above zero before the material again becomes magnetically neutral. The area bounded by this hysteresis loop can be seen as a measure of the losses, and in certain cases it is desirable to minimize this. However, a larger hysteresis loop area is preferable when the remanence property is being exploited, as this means that the remanent magnetism is held longer.