How to read the characteristics of a DC motor?

The characteristic curves of a given motor are charts that enable us to determine the torque output at a specific speed. This blog explains the DC motor characteristic curves, and how we can use them to select a suitable motor for an application. A distinction is made between a regular (brushed) DC motor and the brushless type.

When we read the characteristic curves of a brushed DC motor, it is assumed that we need a certain torque to move a load. For any given torque, these curves show the corresponding rotation speed, from which we can subsequently determine the momentary current draw.

The figure below shows the motor characteristic curves of a typical DC motor (brushed!). 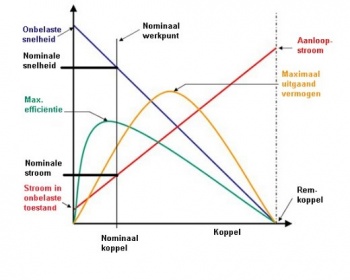 To illustrate, for the motor in Figure 2, delivering a torque of 25 mNm, the corresponding speed is 2000 rpm, at which the motor draws approximately 0.76A of current. This chart also tells us that this torque, speed and power are not optimum values for this type of motor. This is because the nominal (i.e. optimum) values apply when the motor is running at more or less maximum efficiency. However, because in practice the duty point of the motor will not always coincide with these values, the efficiency will be lower at that point, such that in practice the motors will often run hotter than expected.

Apart from the torque, the voltage across the armature (the coils) of the motor also has an influence on the actual speed. This effect can be seen in figure 3. 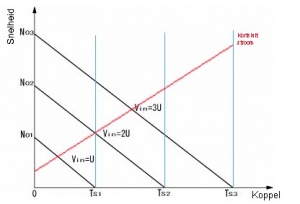 This means that for a given armature, the speed (and at the same time, the torque) can be increased by raising the voltage across the armature. However, the reduced efficiency at this higher speed causes a rapid rise in temperature. For this reason, it is important to keep in mind the duty cycle when increasing the voltage.

At a lower voltage, the motor will run more slowly. This effect is useful for reducing the noise of the motor - and that of the gearbox (if it has one).

It is far easier for the user when it comes to brushless motors. These motors always have control electronics to regulate aspects such as the current through the armature (and thus the torque output of the motor). Above a certain speed, the voltage is too low to overcome the back-EMC, and the torque output goes down. This effect can be seen in figure 4. 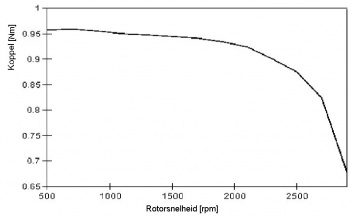 Because the current in this type of motor is electronically controlled, it also offers the ability to run the motor in ‘overspeed’ for a short period. A higher current is then supplied, sometimes more than three times the rated current. Of course, this generates much more heat. For this reason, any motor that is frequently run at ‘overspeed’ during its duty cycle also has a much shorter permissible running time.

At extremely low speeds, the motor controller does not work very well. In particular, in motors with a small number of poles, the torque fluctuation per revolution at low speed is so severe that smooth movement becomes impossible. The lower limit with these motors lies at about 1/8 of nominal speed. If an even lower speed is required, the solution is to use a gearbox.

The supplier’s catalogue often presents a somewhat ‘idealized’ representation of the motor characteristics. Those who are aware of this will not venture too close to the lower and upper limits. 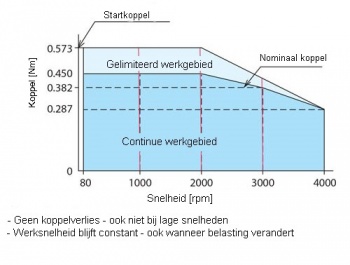